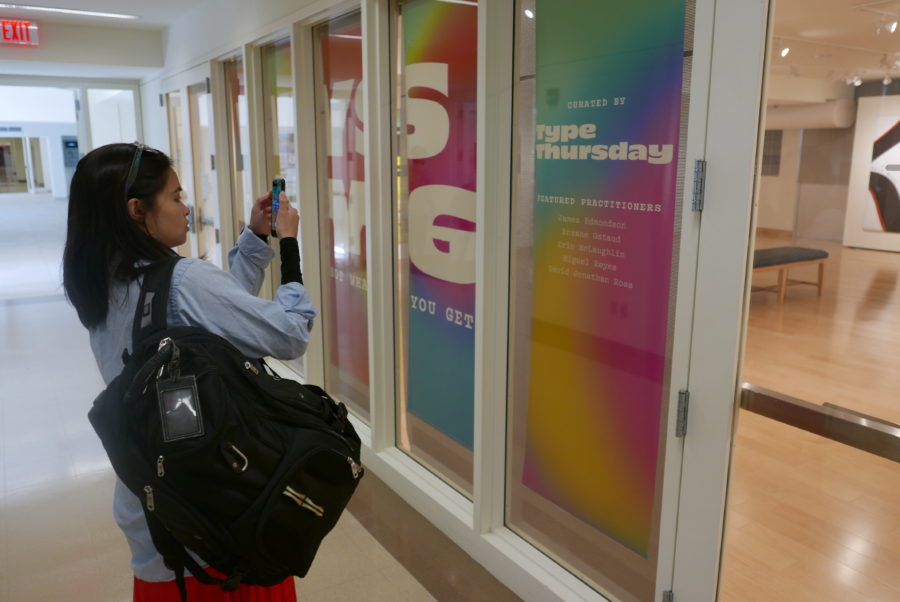 WHAT YOU SEE IS NOT WHAT YOU GET

Curated by TypeThursday
AUGUST 28 – NOVEMBER 15
FARMINGDALE STATE COLLEGE
Memorial Gallery,
A special thank you to David Jonathan Ross, Erin McLaughlin, James Edmondson, Roxane Gataud, and Miguel Reyes for their inspiration and generosity in showcasing their work; The TypeThursday team of Anselm Dästner, Shaofen Deng, Whitney Dobladillo, Kara Gordon, Thomas Jockin, and Karolina Lach, who put the exhibition and this catalog together; Jack Curry, for his illuminating words; Beth Giacummo, for her patience and guidance; Sonal Gadre for her Hindi copyediting; and to all TypeThursday participants, who make it all worthwhile. 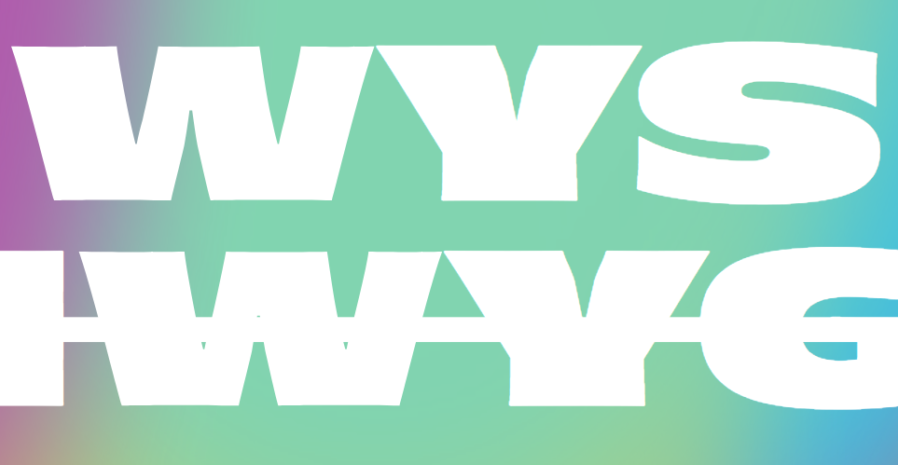 Waht You See is Not What You Get

a set of posters for the exhibiution, catalog design

PDF of the catalog
The texts are written and edited by all the above TT members,
my contributions are designed banners using the typefaces: 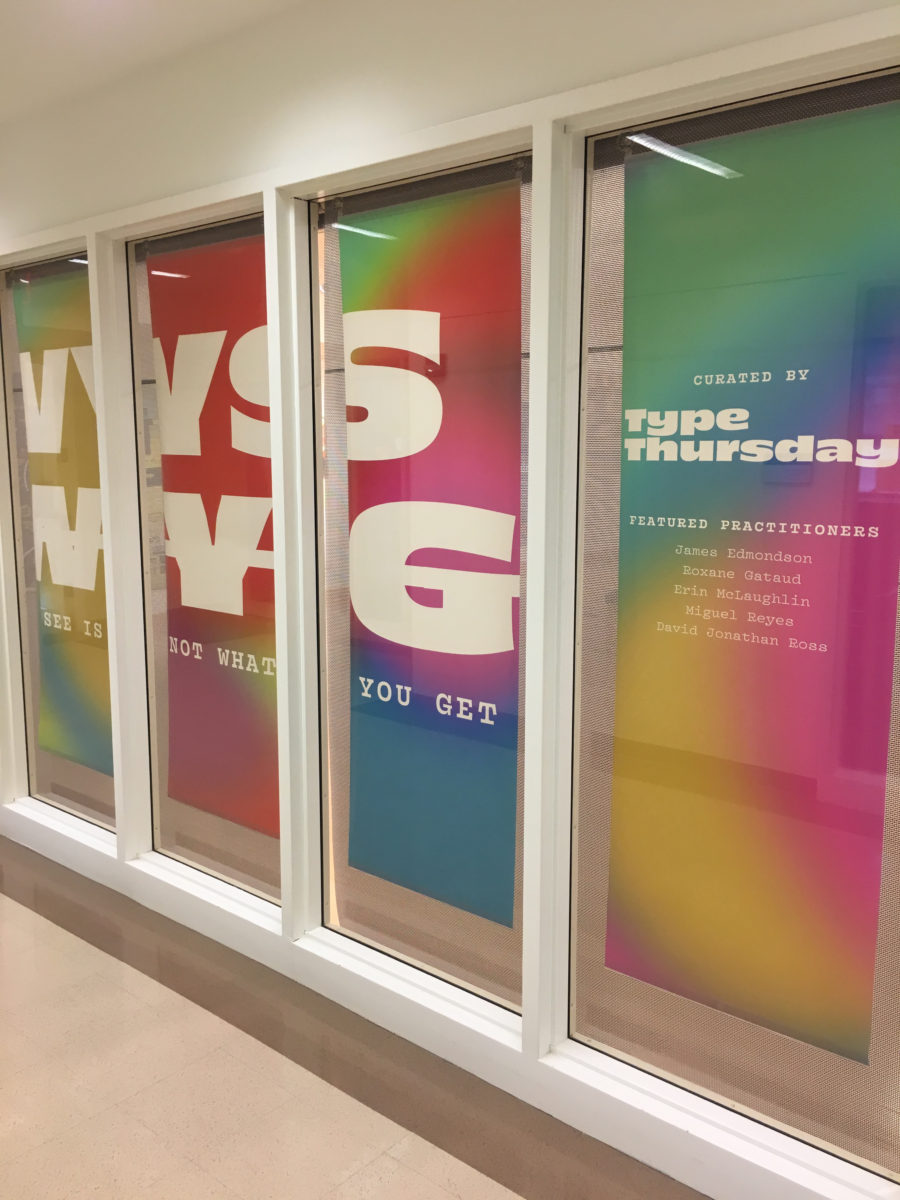 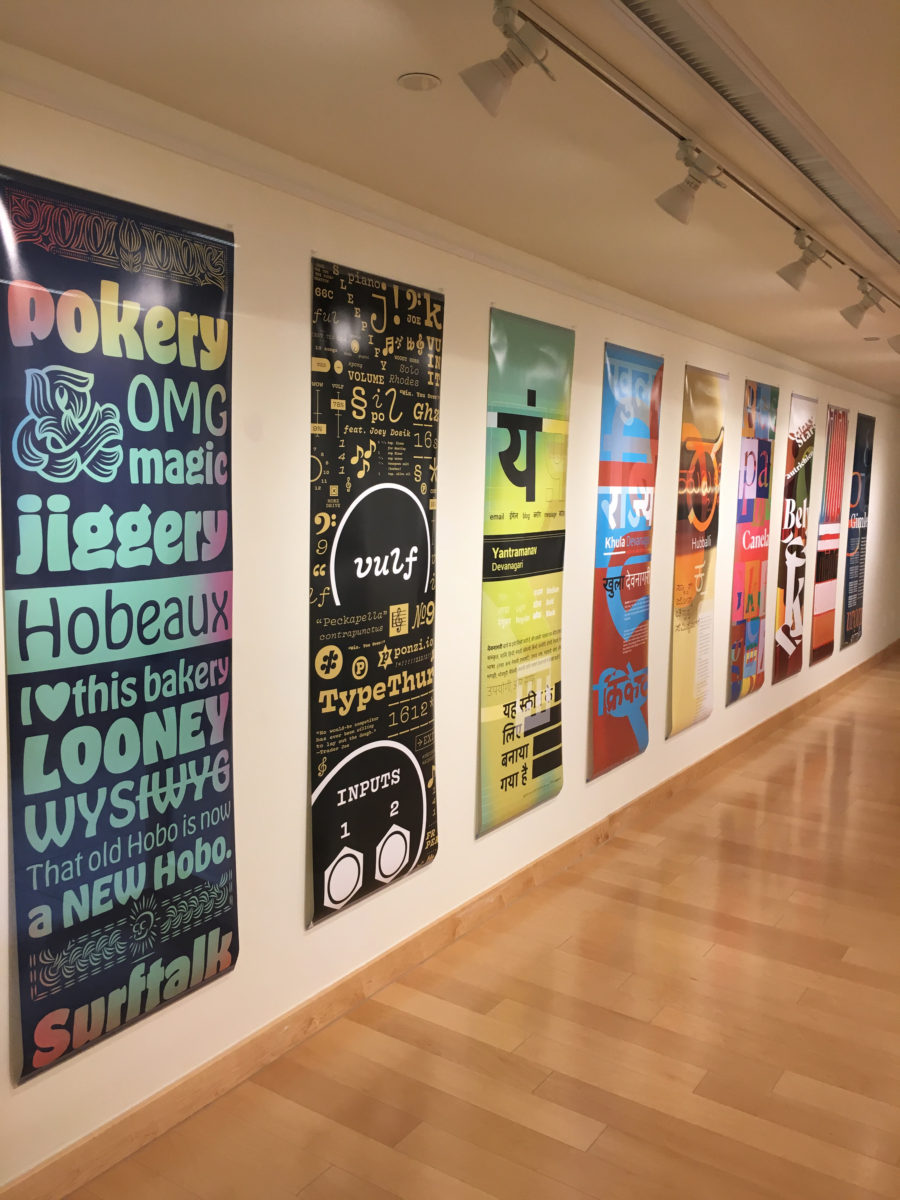 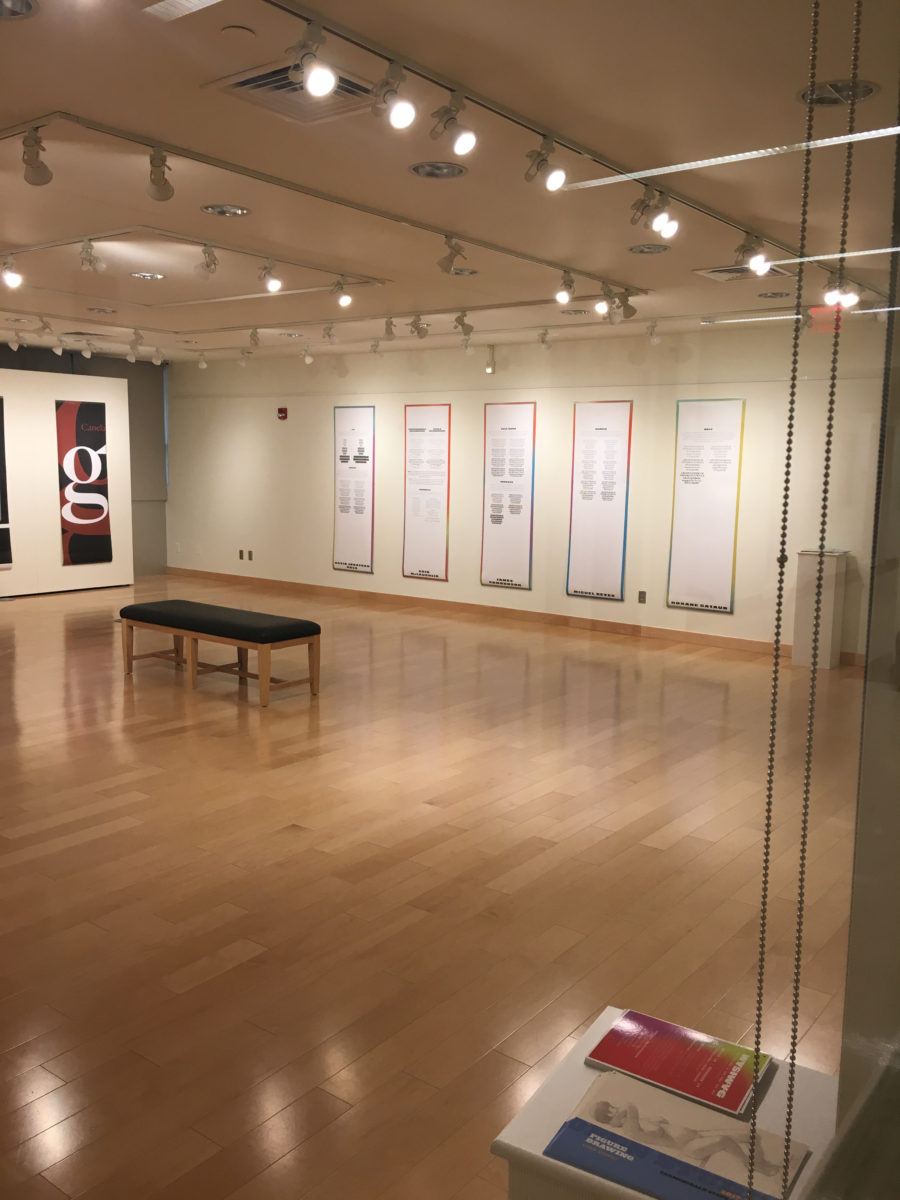 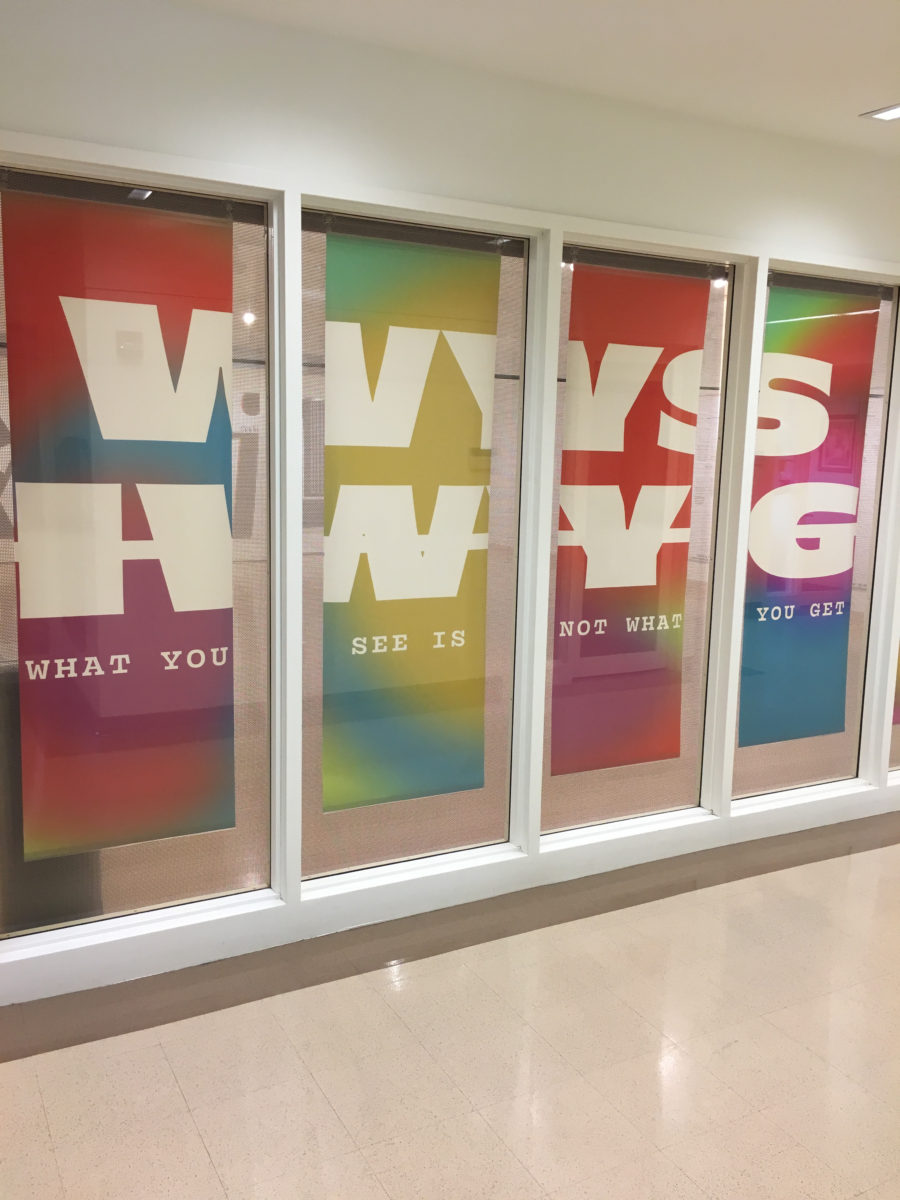 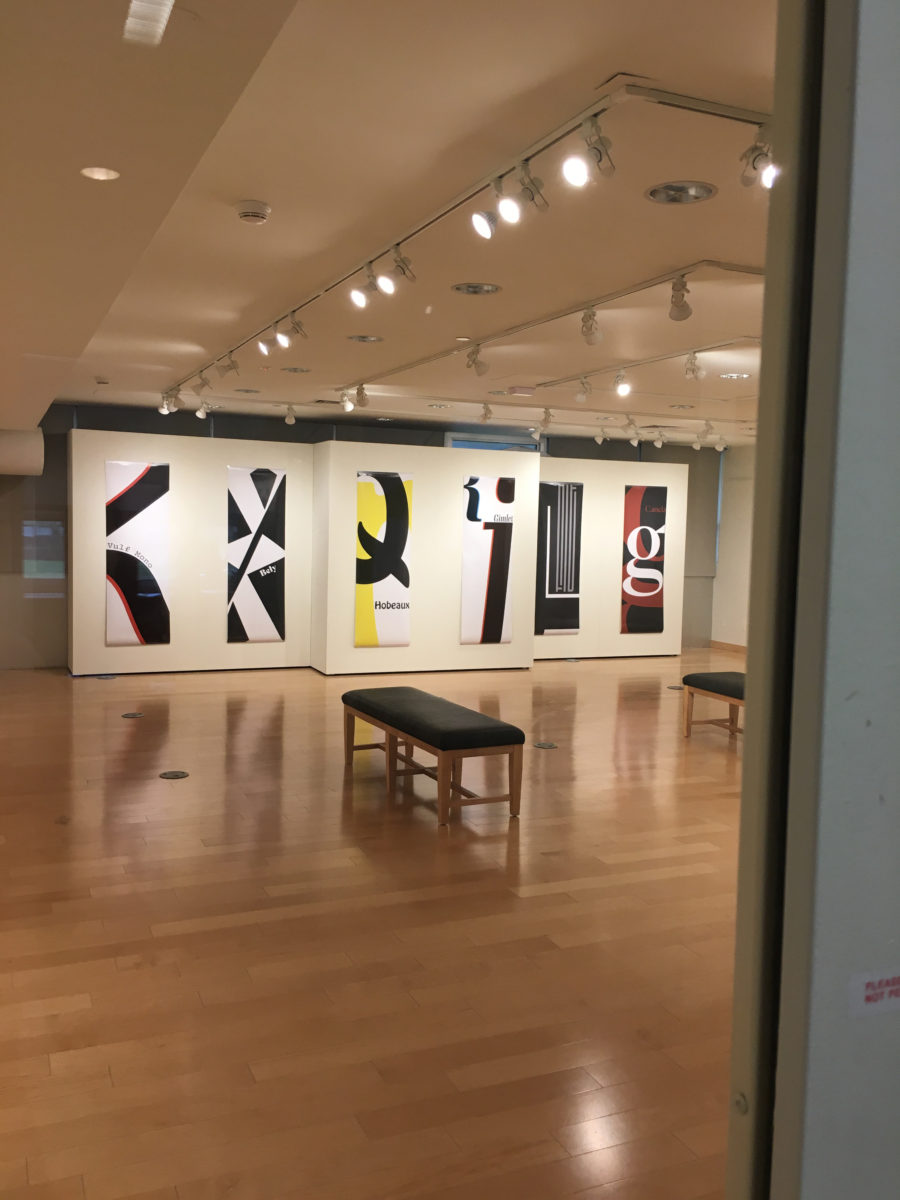 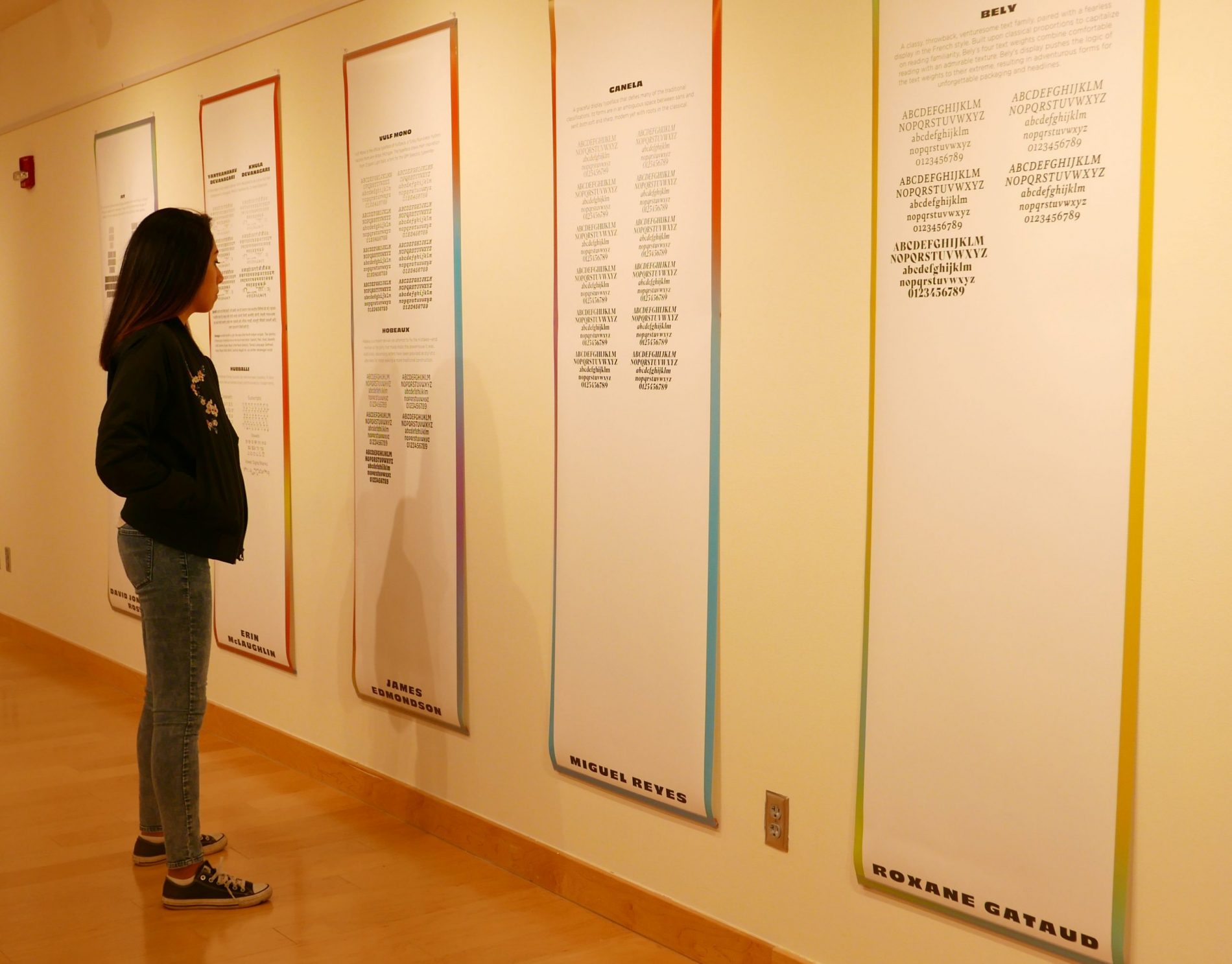 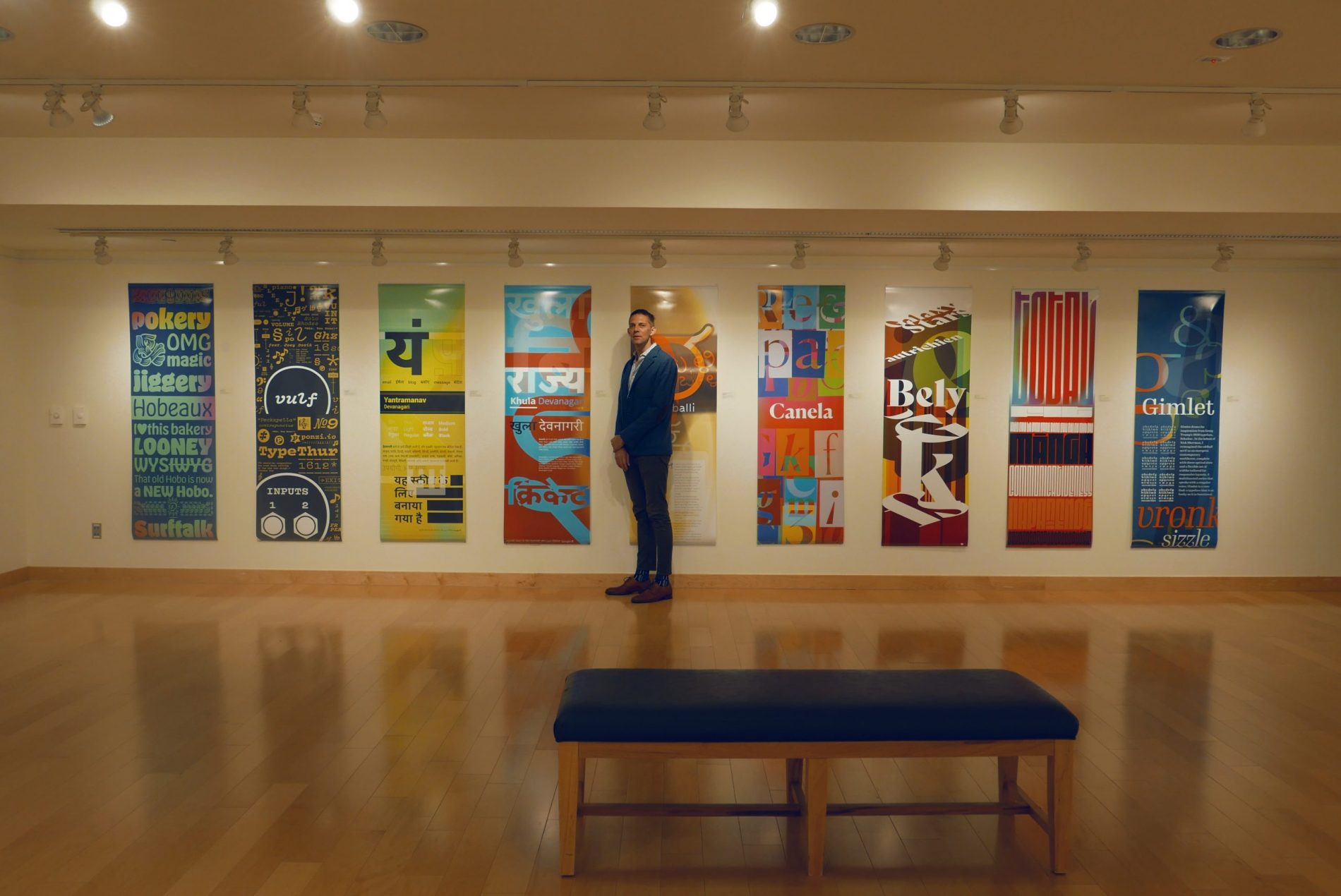 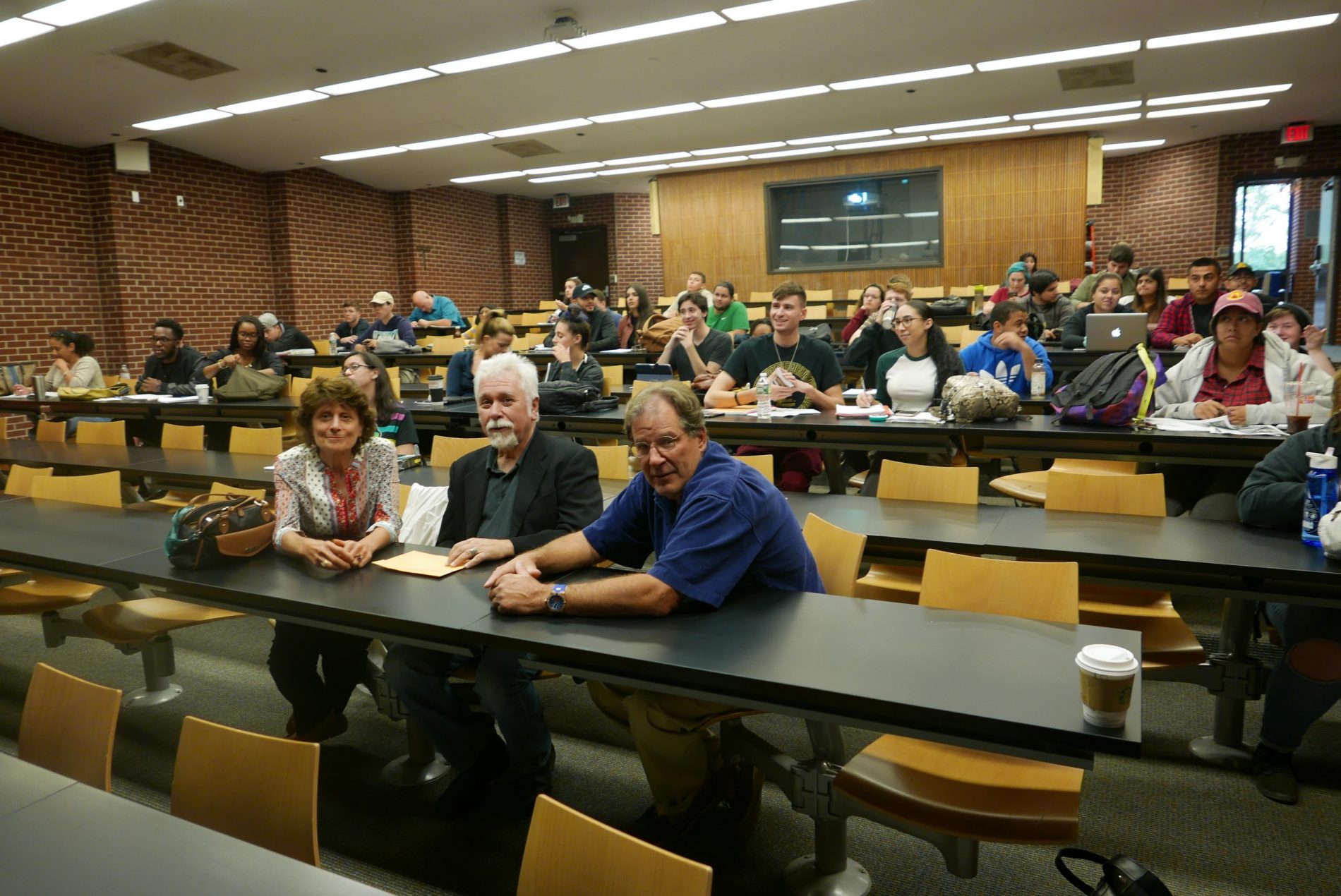 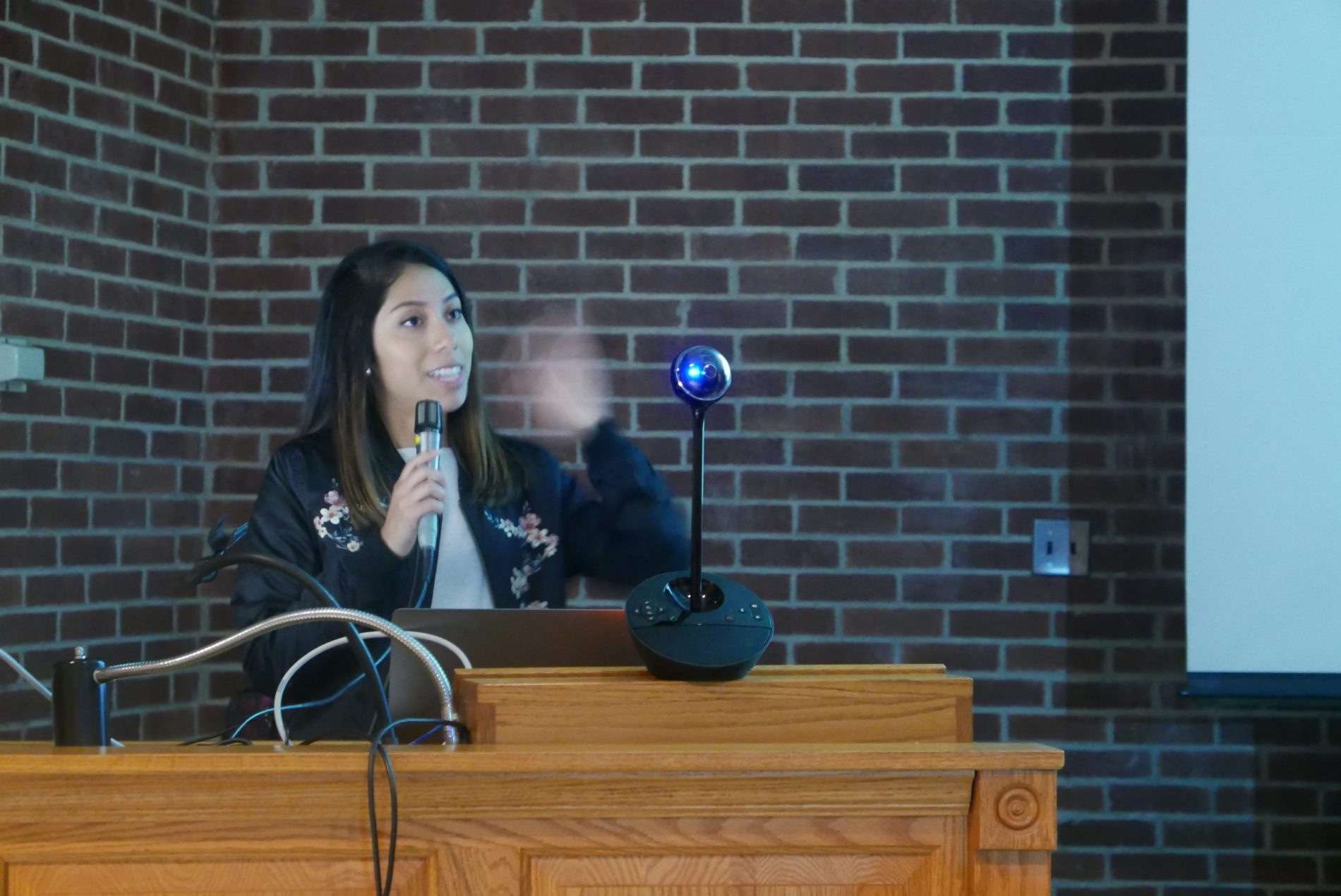 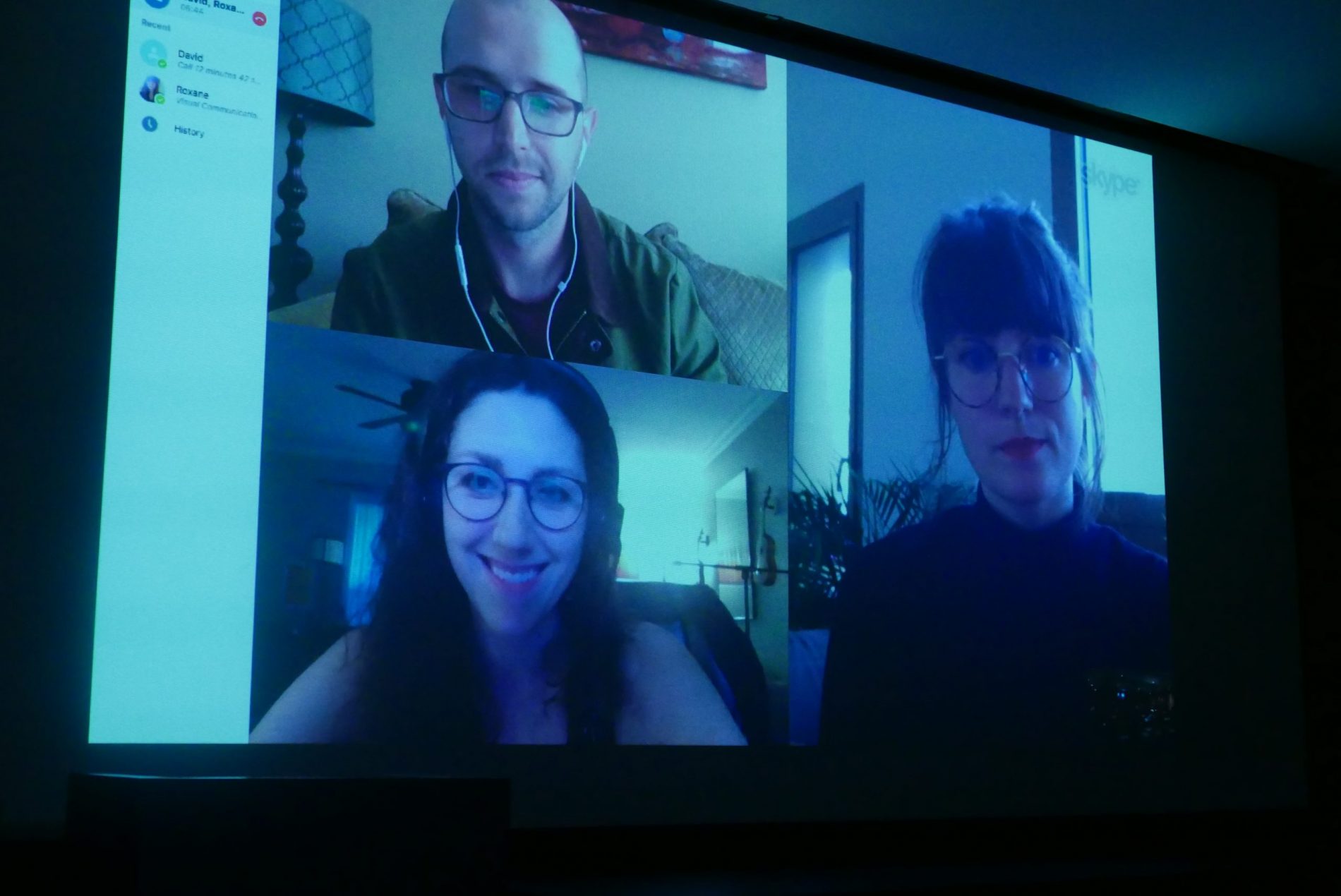 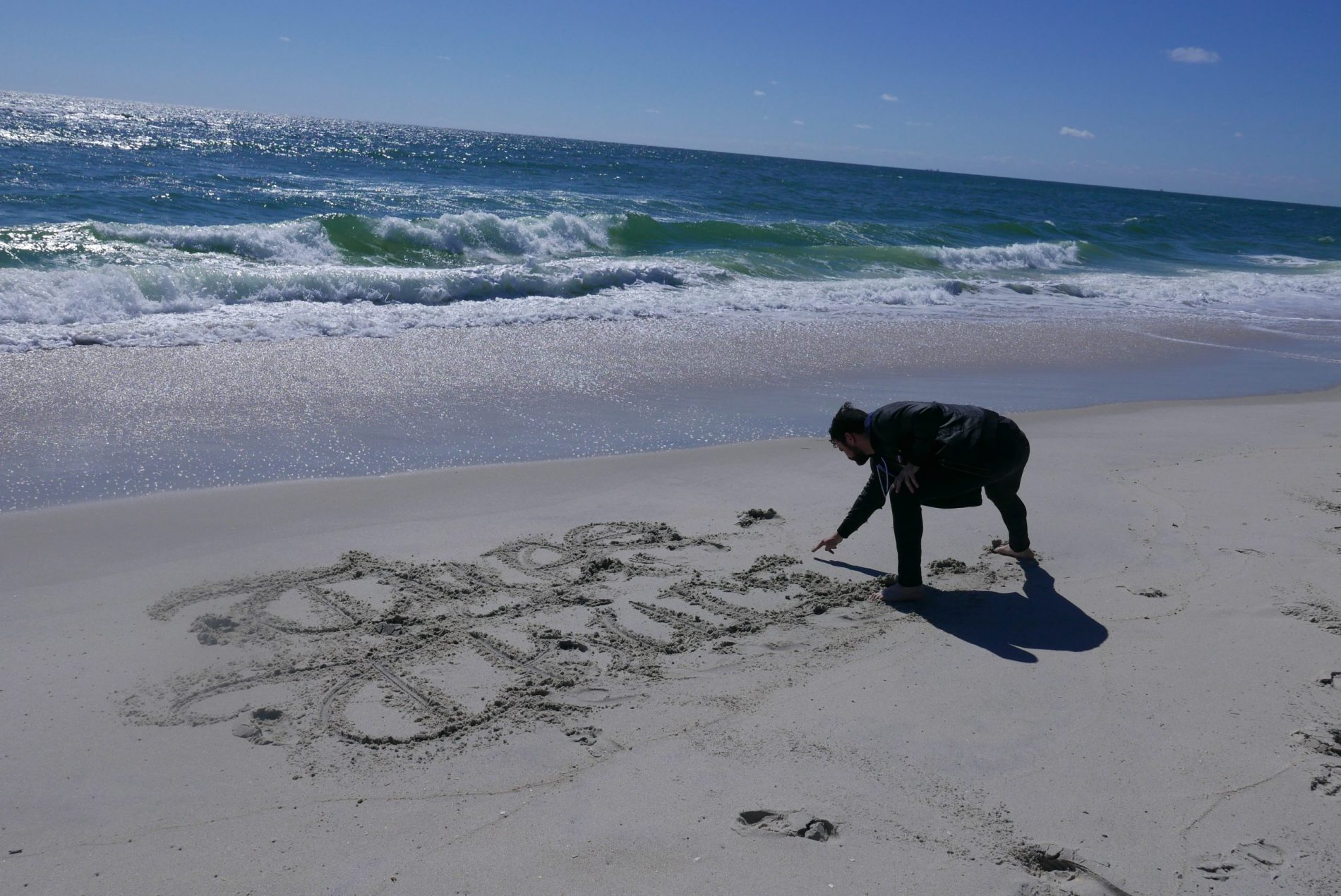 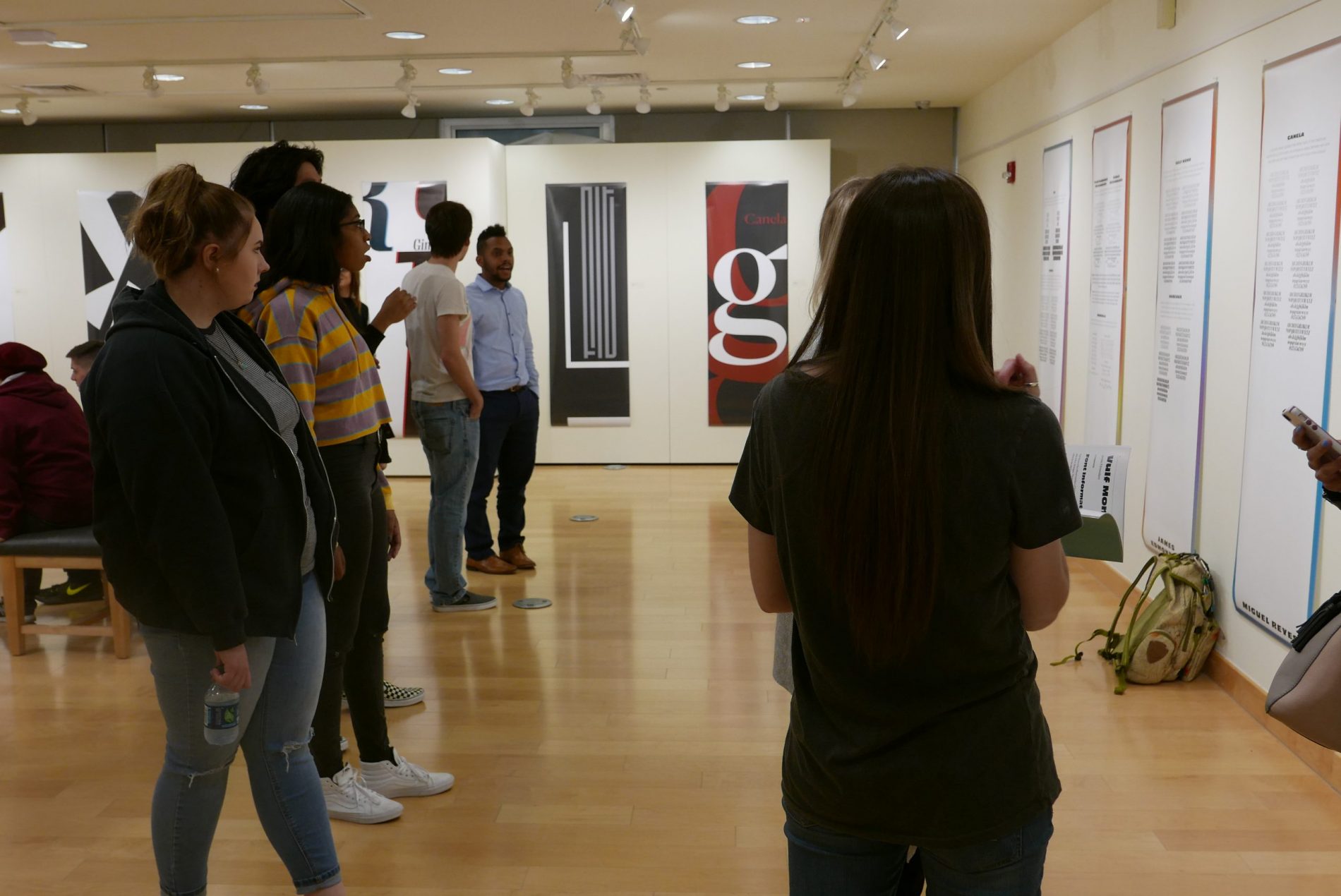 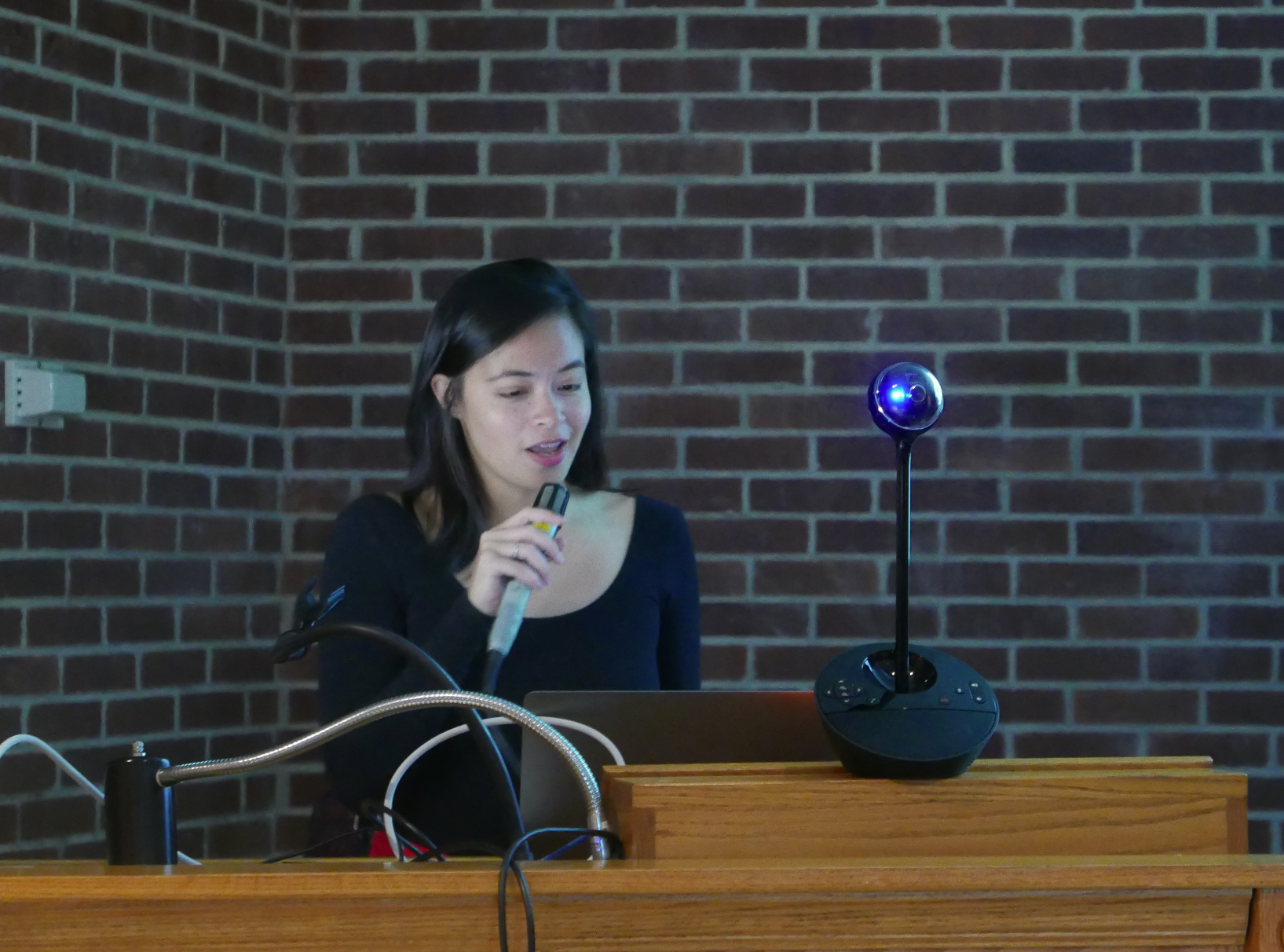 From the designer:
One of the things I learned at Font Bureau is that the way a font is licensed can have a huge effect on how a font is used (perhaps even more than its design). For my typeface Input, I thought it had potential both as a coding font for programmers to use in their text editors and also by designers in techy environments. I developed the license and pricing with these specific uses in mind, allowing programmers to use the typeface for free on their own computers, but charging for publicly facing uses. This model allowed the design to be successful. Years later I still love getting emails from Input users and am thinking about ways to improve it. Getting direct contact with Input users was one of the reasons I was excited to start my own foundry.

Fit is a hyper-stylized series of caps designed with one thing in mind: filling up space with maximum impact. With an expansive range of widths, Fit will take just about any text and fit it into just about any space. From the impossibly narrow Skyline to the gargantuan Ultra Extended, you will find a family rich in panache and expressive potential

For my project Font of the Month Club, anyone can sign up, and it’s as little as $6/month if you sign up for a year. When you sign up, you get the current month’s offering right off the bat. Then, at the beginning of each month that follows, I’ll send you a new font. I make no promises as to the design of the font or the extent of its character set, but I try to make it generally usable for major European languages. Each font comes with my standard “Mini” license: a perpetual license for up to 3 desktop computers, 15,000 web visitors, and an e‑book. I wanted a way to connect regularly with users, to try out ideas in a controlled environment and get feedback, and to share more of my process. I see the Font of the Month Club as the best way to distribute small display faces and side projects that I like to work on. I also see the project to help push me to work on more fun and interesting typefaces without having to commit to years of development or a full retail release.

Gimlet is a funky quirkhorse workhorse inspired by Georg Trump’s 1938 typeface Schadow. At the behest of Nick Sherman, David Jonathan Ross reimagined the oddball serif as an energetic contemporary workhorse, complete with three optical sizes and a flexible set of widths tailored for responsive layouts. A multifaceted series that speaks with a singular voice, Gimlet is a rare find: a typeface that is as funky as it is functional.

From the Designer:
I ended up taking a Hindi language course while I was working at my first graphic design job. Learning to write Devanagari was the first thing we did in the class, and I caught on very quickly. But I noticed that my teacher had a hard time typing out our Hindi worksheets. The vowel signs and marks would show up in the wrong places, and he’d have to fix it manually or draw on them. I would try to practice reading Hindi stories and news articles on the internet and found out that quite a lot of websites just weren’t functioning correctly. The text was completely unreadable. I hadn’t realized that for so many people in the world, their languages weren’t supported by web browsers or system fonts didn’t exist. You couldn’t get any access to information online unless it was in English, this was back in about 2007 or so. It’s gotten a lot better, but that was a big issue back then.
That’s how I got interested in learning the Indic scripts themselves and learning about typography in other languages, other writing systems. I had never thought about that before, not really. I always liked typography classes in school, but I never thought of it from that standpoint: all the people in the world need to use typography. There still are tons of people in the world who can’t read a book or a website in their native language or script, and that’s insane. If I can take six months out of my life to make a product for people to read with, I think that’s the best thing a typeface designer could do. This is a very concrete, direct way we’re helping people. This seems a lot more crucial.

A Devanagari multi-weight typeface family designed to be a style-matched companion to the popular Roboto typeface by Christian Robertson. Both are libre (open source), free-use typeface projects initiated by Google.

A Devanagari multi-weight typeface family designed to be a style-matched companion to the popular Roboto typeface by Christian Robertson. Both are libre (open source), free-use typeface projects initiated by Google.

From the designer:
The “ideal” versus “reality” battle is something that’s always in my mind. The idea is that I’ll execute on the things that are most interesting to me and then people will buy them because I did a good job. The reality is most of the typefaces that people buy are things they’re used to viewing. That kind of project isn’t always the most fun for me. Finding a balance between what I’m creating and having it be something that people will find consistently useful is what I’m trying to figure out now.

The original Hobo was an art-nouveau influence design released in 1910. Over the years, this one-of-a-kind and often maligned typeface slowly degraded with each transition in type technology. In the 1980s, Hobo was one of the first typefaces digitized due mostly to its unique aesthetic and malleable voice. Unfortunately, the care taken in tracing the design left much to be desired, if only because type designers hadn›t yet figured out how to best draw curves. Hobo was in desperate need of some attention, but unfortunately got installed on millions of desktop computers as it was. Hobeaux is a modern revival—an attempt to fix the mistakes and maintain all the glory that made Hobo the powerhouse it was. Each character was redrawn and spaced from scratch. Additionally, descending letters have been providing as stylistic alternates for those seeking a more traditional construction. With five weights and several features for the designer seeking a high-performance type family, Hobeaux is a ready and willing addition to any typographic palette.

Vulf Mono is the official typeface of Vulfpeck, a funky four-piece rhythm section from Ann Arbor, Michigan. The typeface draws main inspiration from 12 point Light Italic, a font for the IBM Selectric typewriter.

From the designer:
What makes Caslon great is the awkwardness of its texture as text. Caslon, in comparison to other typefaces, does not follow the same principles as a system. You’ll see the weight in unexpected places. It’s all over the place. It works. The same goes for Caslon’s proportions; they stand out compared to other typefaces. Related to Caslon’s texture is its crispiness. I’ve only seen in Matthew Carter’s interpretation in Big Caslon based on the largest sizes presumably cut by Williams Caslon I, but I haven’t seen many other typefaces capture Caslon’s crispiness. The lowercase is where we can see this precisely in shapes like e, c, b, d, p, q where the weight distribution is asymmetrical is not systematic as other typefaces. The contrast between thick and thin is something special here, and Canela plays with that too. Once talking with Paul [Barnes] about the project he suggested what will happen if Caslon was sans serif. I started playing around with that idea, but I could not find anything interesting. I’ve practiced stone carving as part of my training in Type Media at KABK. During my exploration of terminals and serifs, I came across the idea of trying something inspired by that stone carving experience, and we thought we found something new combining Caslon with this. Canela Italics differed completely from Caslon. The goal for the italics was to find something more appropriate for the Romans. The italic direction was to emphasize the monumental feeling from stone-carved letters.

Graceful display typeface that defies many traditional classifications. Its forms are in an ambiguous space between sans and serif, both soft and sharp, modern yet with roots in.

From the designer:
I had to do a lot of work on it: take some final design decisions, refine the drawings, add weights, extend the character set, and of course do the kerning, etc. I worked on the development with José Scaglione and Veronika Burian of TypeTogether; they were supportive, open, and patient with me. Being a total beginner influenced my decisions on the design. I consider this typeface as a reflection of my learning in the type design field. First, the structure of this family came from my graphic design practice. I wanted to create a typeface I would use in my projects, that’s why I chose to design only four text weights and colorful displays. About the drawings, being a beginner made me draw very spontaneously, and I did a lot of experiments. Every time I was learning something or documenting myself on a particular matter (proportions, italics, etc.), it had an enormous impact on my project and helped it to grow.
I learned with them how to extend a character set, like finding the right proportions for small caps, superiors, inferiors, etc. (those things appear evident to me today, but two years ago I had never done it). Once Regular and Italic were ok, I started to rework the Bold and started the Bold Italic from scratch. After completing the text weights, I could have a bit more fun b reworking the Display weight During the year and half of the development, I would work and then we had Skype meetings where they reviewed what I have done and gave me feedback. It felt like still being at school, which was great because I learned so much. It wasn’t easy every day though, as it was my first typeface, I put a lot of pressure on myself. I wanted it to be perfect like it was the only typeface I would ever draw.

A classy throwback text face with a fearless and venturesome display.